The system actors are thumbing their nose to someone/something and paint their own version of the truth. Unethical behavior is not uncommon in such situations. 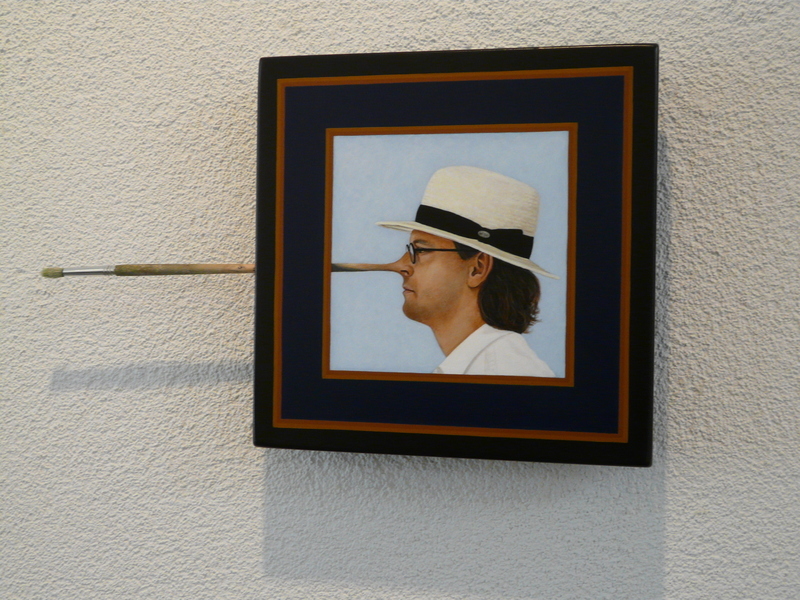 The concept of systems of denial was introduced in a paper by Andrew Hill and Stephen Gerras about strategic resistance to military innovation (source).

They explored how successful organizations focus organizational energy and attention on refining their dominant theories of competition, often resulting in dysfunctional organizational responses, or systems of denial, to strategic anomalies - inconvenient information - that contradict assumptions. Theories that were once the basis for dominance become barriers to innovation and frustrate adaptation.

According to the authors, decision makers become structurally blind to significant changes in the environment. Such organizations tend to have the following behavior:

The authors admit that these responses are not in themselves bad. Each is a fundamental part of legitimate inquiry. But they can be misapplied, as often happens in the defense of established theories and concepts against an onslaught of information that undermines them.

The readers that have worked in the information and consultancy industry will probably recognize these behavior patterns. They apply not only to successful armies, but also to e.g. IT-departments, businesses and the public sector. The responses can manifest themselves separately of in a combined fashion. Examples of systems of denial are everywhere. It is quite easy to come up with examples. Some of them are quite recent.

This week, I watched a perfect example of a system of denial on the German Television. The program (Frontal21, 24-05-2016) documented how a German politician created separate categories of emission test tolerances for diesel cars, in order to minimize the number of cars that were affected by the diesel scandal. 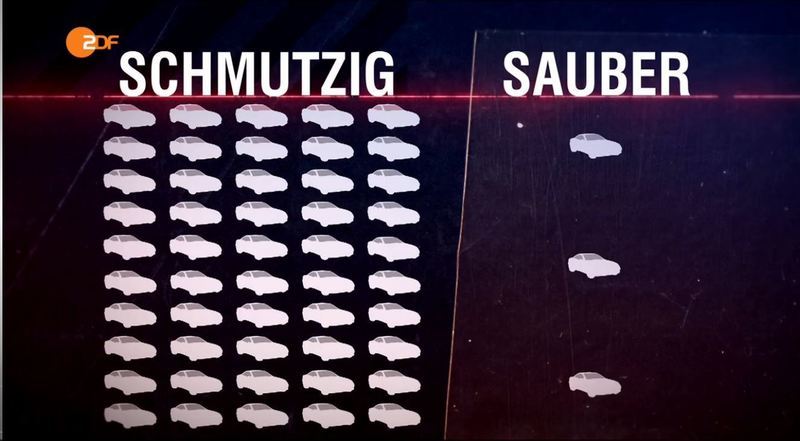 Initial classification by emission limit in dirty (schmutzig) and clean (sauber) diesel cars
(Source)
The new categories were at random invented by the minister of transport by creatively interpreting an EU-regulation that is even not been implemented yet. The result was that, instead of only 3 of 53 cars adhering to the emission norm, suddenly 21 cars were categorized as being not noticeable harmful for the environment.
Incidentally, the BMW cars that benefited from this reclassification are manufactured in the home country of this national minister of transport.
Example: How to deny the effect of water scarcity
The scarcity of blue water is becoming a worldwide problem, especially for food production. If severe water shortages occur, the main impact is usually upon agricultural systems and farmers, since they need the most water. See for instance the report mentioned by the Washington post (here).

Number of months in which blue water scarcity is above 100% (Mekonnen & Hoekstra, 2016)
(Source)
Last month I heard in a program on a South African radio station (Radio Sonder Grense) how a politician accused his opponent of not knowing the facts in a dispute about the water shortage for farmers in South Africa. However, this opponent named facts and figures related to the specific local situation.
The politician ignored his objectives as being not relevant and almost obsessive. He put his focus on another not quantifiable aspect and maintained this position until the end of the session. However, a look at the figure above could have given him good course to think about a long term approach to the water footprint in South Africa to feed his electorate.

Good governance and transparency are advocated by policy makers and constituents as being mandatory in a modern democratic system. No wonder that the IT-director of a European public organization was looking for ways to support the policy making lifecycle. His IT-department had tried to create solutions over several years without great success. Therefore, he asked an external company to create a proof of concept.
The company managed to do that within ten days. As the company presented its live proof of concept, the IT-Director - literally - almost fell of his chair. He declared that the demo offered more substantial functionally for his parliamentary clients than his own IT-department could have created in a whole year.
He also acknowledged that the presented approach was astonishingly 'fit for purpose' to serve the specific characteristics of policy making and policy life cycle management, including the mix of formal and informal activities.

Options of a policy maker workplace
(Source)
The IT department reacted totally different on a demonstration of this policy maker workplace. They suggested that the external company tried to erode their efforts in database management and running projects. They also claimed that their parliamentary system was too volatile and ruled by too many exceptions to be supported in such a way.
As the external company replied that therefore their system was designed for change and built in such a way that the exception was the rule, the group was silenced. However, they were not convinced that their existing efforts needed a re-assessment. Nevertheless, their director decided to consult some policy makers.


Faced with the option of a smart support of the policy process, including regulatory impact assessment options, the consulted politicians turned out to be not interested (which is probably not surprising to some of us). It became clear that they didn't really care about transparency, governance and policy outcome. When innovation made these objectives feasible, they tended to shy away.

How to deal with systems of denial

Systems of denial are simply hard to circumvent; especially when leading actors are part of the system themselves. Andrew Hill and Stephen Gerras describe several ways of dealing with systems of denial. However, they state rightfully that none of the approaches work without what they call 'educated officers'.
According to the authors: 'Underlying all recommendations is an inescapable reality: we need intelligent, open-minded leaders - men and women - who understand the fundamental principles of logic and evidence, are nimble enough to recognize the significance of strategic anomalies, and have the mental tools to think of what to do next.'
Such leaders will overcome systems of denial by focusing on 'the counterfactual work of organizational change - understanding what is not happening and which possibilities are not being discovered, explored, developed, evaluated, or implemented - and why it is not happening. This requires understanding how inconvenient facts are resisted and developing a strategy for overcoming that resistance.' 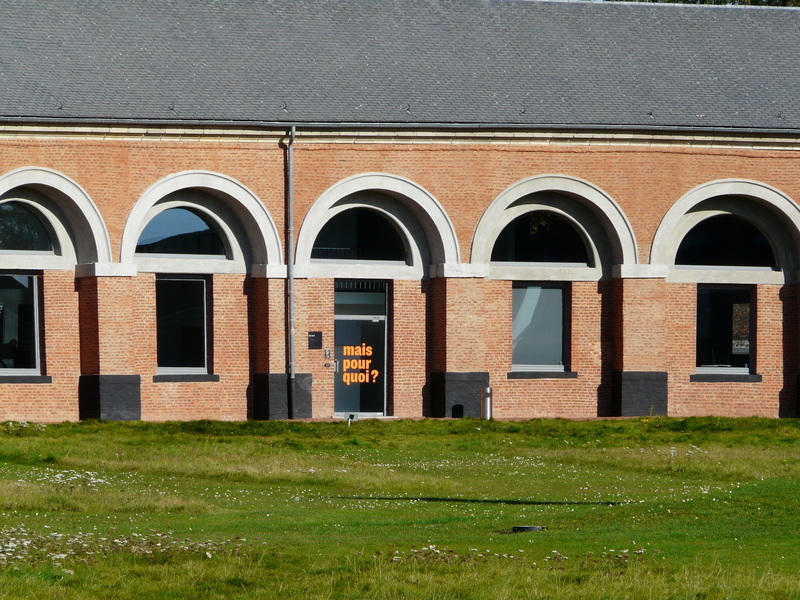 There is no magic formula to deal with resistance, incapability to change and lack of agility. If the leadership itself acts as a system of denial, no innovation will be possible until a crisis arises, the leader is replaced, or both. A recent example of a strategic transformational shift after a leadership change is Saudi Arabia, that intends to diversify its economy and reduce its dependency on oil exports (source).

Intelligent policy automation
It may be obvious that smarter ways of creating and executing policies will be prime targets for systems of denial (as already indicated by the before mentioned third example). Organizations that want to innovate by implementing systems based on contextual intelligence, cognitive computing, robotic process automation (RPA) and similar smart systems for various types of knowledge workers, must be extremely alert to spot resistance symptoms. They need to have an answer to the manifestations of resistance without compromising their 'future perfect'. Goal orientation and perseverance are as important as showing empathy, having expanded conversations with the innovation blockers and making the benefits visible to the various stakeholders.
Ethics and politics
Incidentally, in the case of unethical behavior in politics, this will probably last forever. Especially if it remains unpunished due to social amnesia and apathy. Ultimately, it will widen the trust gap between politicians and their electorate and shape room for populists. 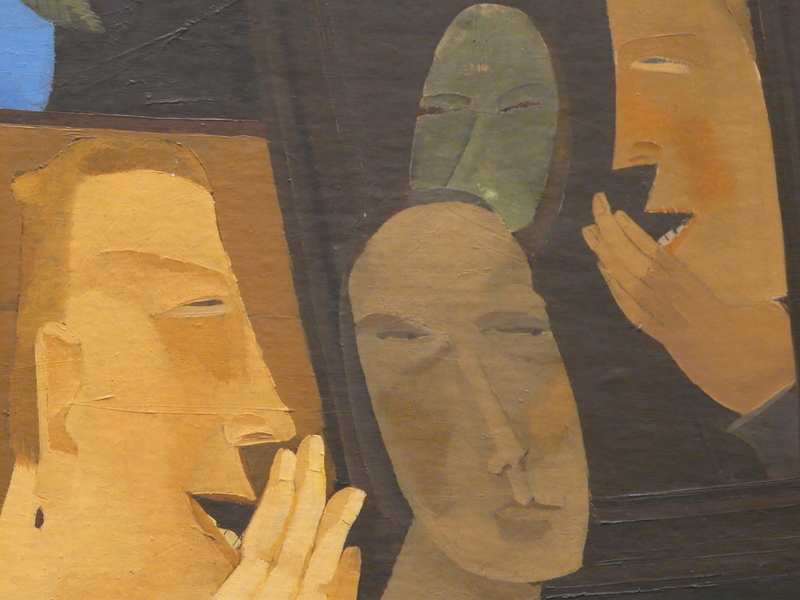 Mu.ZEE Oostende, 2012
They will use arguments for untrustworthiness, in combination with the fear for the unknown, to mobilize voters for their agenda. The symptoms of this response are as widespread as these of systems of denial.
This blog is also published here.